Hello again,
I put some test values in font info in FontSelf AI, create my font and checked the font infos in apple font book.

In Apple fontbook ‘language’ and ‘script’ are missing, because my test font do not have all letters of the alphabet. ok.
But in my other font, which contains only A - Z and a - z letters, I see a very long language list without having any special character of this languages in it, like a ‘ä’, ‘ß’, ‘ø’ and so on. Confusion for me and perhaps later for a buyer of this font.

Some of the field in FontSelf font info will not show in Apple Fontbook like the designer.

And when I compare my fonts with ‘Gilbert Color Bold’ than I see, that the art of the fonts are different. I guess since FS version 3.5.1 all fonts are now ‘PostScript-Type1’, why? 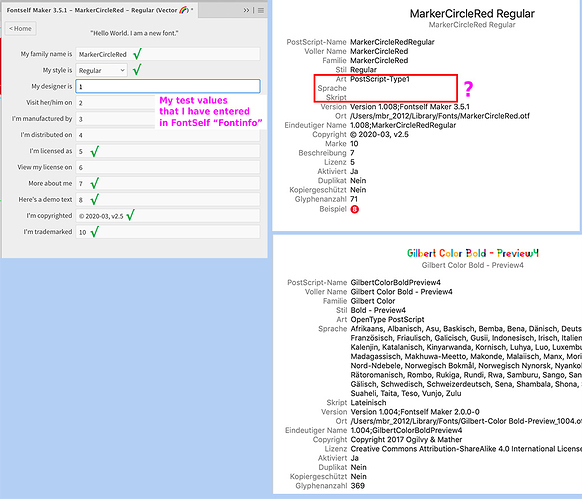