I hope I’m the first to say something regarding this, and if you want, you can skip the first 2 paragraphs. The important part is the 3rd and 4th.

I’m very glad to see there is finally a creator-friendly tool for making a variety of fonts using PS and AI. When I purchased the extension, my intent was to use it to help with utilizing a “bitmap font” my friend made for our game that we are developing. The “font” itself is just a png with each character located in a part of the image that you could be determined by performing calculations to the ASCII value of that character. So as long as you have a rendering system that does that, you can render that font.

But if we want to use our font in photoshop or in other programs. We are restricted to only using OTF. This extension ultimately is helping us bridge that gap by converting that “png font” into on OTF font. So today I attempted to do just that with the photoshop extension so we could make a bitmap font. I did a few characters, only to realize that the characters have been blurred out due to their low resolution and not using a “nearest neighbor” option to upscale. I also tried making the font in illustrator by using the “Create Object Mosaic” option to turn the png into a bunch of vector squares. And it worked, but there are white line artifacts between each square. I know the otf format probably wasn’t designed with this particular style in mind, but it still is a style, and one that many people use.

So what I’m asking for here is just some general support for low-res, retro style, “hard edges” fonts that are based in a bitmap. Even something as simple as an ability to use “nearest neighbor” when the font is upscaled (if that feature exists for otf) as a bitmap font. I believe 8-bit fonts should be created as bitmap otf’s anyway since I have a feeling rendering a bunch of squares is probably a lot more cpu taxing.

If this isn’t possible, I do have an alternative suggestion. From time to time we might end up making little changes to the png file anyway, and having to constantly update the otf file would get annoying. It would be nice to be able to tell the otf file to use this png as its “render source”, and then just set the glyph data to specify where in the image to look for the image data to render. So we can somehow then update the png and it would automatically update the font as well (since it refers to the image directly). I know that probably sounds bizarre, but I just felt like sharing these suggestions with the hope that someone has a better idea or any ideas on what I should do for our situation.

If you need a good tool to create pixel images try Pixelmesh https://nevercenter.com/pixelmash/

Yea, I know there are other 8-bit fonts. But our workflow right now is making the font in paint.net (thats what my friend uses for his pixel art), and then he sends me the png file and I have to convert it to a bunch of vector squares in illustrator. But when I started to create the font data in fontself it would show little “artifact gaps” between each square for some reason.

But as I said, it makes more sense to have this style of font existing as a bitmap font since that’s ultimately what you’re trying to do (and upscaling a font like this shoudn’t use bilinear upscaling, but instead just use nearest neighbor).

I did not get the point, why a bitmap font is better than a vector font. By the way this is the fontself-Illustrator forum, not the -photoshop forum.

for creating graphics based on quares, pixels and other forms there is a useful programm Hexels 3 which can export the quares as svg, so it can be used in Adobe Illustrator as a font.!

This is my way to create from bitmap to svg-quare-pixel a little image or symbol: 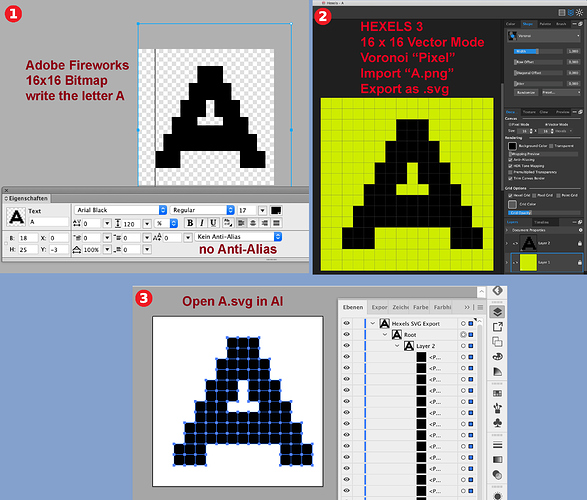 Reviving this topic as it has not been answered. If this is to be buried, let’s make sure there is a useful post that either informs or directs someone to another post.

I see a lot of off-topic replies and questions but nothing that helps the OP or anyone else encountering this problem.

@Andrew900460 did you end up solving this with Fontself? And did you use Illustrator or Photoshop?