Maybe this has been answered and if so I apologise. I would really like it if I could access characters within Fontself, and then add my glyphs. So for example I could click to view all the symbol glyphs, and it would show ghosted glyphs that I haven’t added yet. Can I do this?

At the moment I find it hard to type what glyph I have just created. Either because I forget what it is on the keyboard, or I can’t access it. So I have to copy and paste the typed glyph from the template to the area in FontSelf where I define my new glyph. This is especially true when adding glyphs for language supported fonts.

I sincerely hope that makes sense! I’m not sure I explained that well!

I would love this feature too! I’m making an Ethiopic font with over 300 characters and I keep having to copy paste them from the web in order to find them, but have no good overview of what I have missed so far.

I wish you success.

Thanks, that’s a good tip if you are designing a font that uses the basic latin set. Unfortunately for me, and I don’t know if that’s the case for @plushdesign, but my characters are not in this template. So in order to even make a template like this I would need a good overview of the available glyphs for the series that I am using.

Thanks for the idea

Although the issue for me isn’t seeing what is missing, but having to copy every character in to font self because I can’t type it on my keyboard.

For example, if I want to enter the glyph é, then I can’t type that on my keyboard, so I need to copy the text in to font self, after copying my glyph. It just means lots of copying and pasting. Whereas if I could access the template within FontSelf itself, then I could simply add the é to that pre-defined glyph space…

Not sure if anyone gets what I mean here! Hopefully someone will

Maybe you can explain a bit more what glyphs you are making and what your workflow is?

For example, I am creating an Ethiopic font. So I draw my glyph in Illustrator, then rename the layer (by copy pasting the character from the web). Then when I drag that design in to my FontSelf app it automatically recognises which glyph it is because of the name of the layer I gave it. 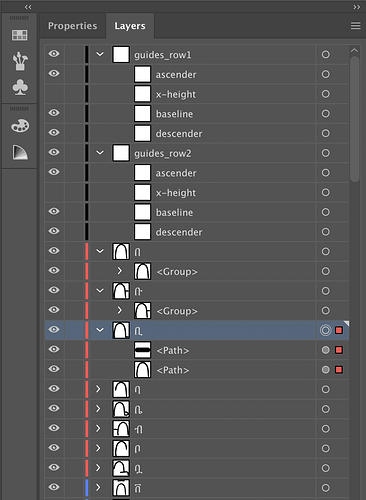 So I design all my glyphs on the one layer, in a row, in Illustrator. Then I drop and drag in to FontSelf. it works fine for a-z and A-Z as well as 0-9. But where it doesn’t work is alternate letters and symbols. So things like the Yen symbol, or TM symbol, or letters with accents over them. Then, as you said, I have to fine the character from the web (or I use characters from the template) and copy and paste them in to Fontself.

That’s the bit I was hoping to avoid, all the copying and pasting from the template, in to Fontself. Especially for a latin alphabet with language support. I am only creating all the glyphs from the character set template. So having those characters already in Fontself, and then I can just add my Glyph to it, would avoid that copying and pasting.

It is such a tiny thing really!! It was just an idea that would save time

Thanks @urs7000 for the suggested workaround on using the template to identify missing glyphs. We won’t be able to support custom filtering soon, but here are a few quick tips to ease the creation of many more glyphs:

Let us know if any of these will help.