TIP: How to release a font as an open source font

INTRODUCTION
If you do not pursue any commercial goals with a font you have created yourself, you can release it to everyone. To make this clear to the user, you should mark your open-source font with the appropriate licence.
The best-known form of licence is the SIL Open Font License, or OFL for short ( https://scripts.sil.org/cms/scripts/page.php?site_id=nrsi&id=OFL ). Fonts marked with OFL may be used, modified, copied and passed on by the user both privately and commercially. However, it is forbidden to sell modified versions under the original (licence) name.
Despite the licence type OFL, the user of a font should always read the associated licence conditions carefully.

Instructions in German can be found at http://cg4u.de/ofl-fontself-maker

How to release a font as an open source font is described below for FONTSELF MAKER: 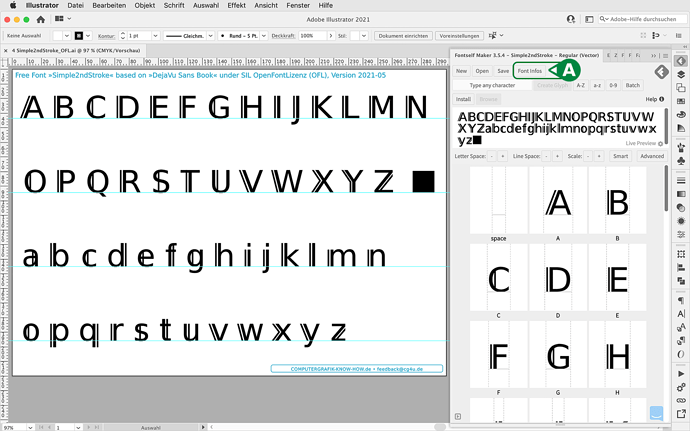 In the new window you will see many fields where you can enter information about your font.

C. In the field “View my licence on” (and this is the decisive entry) enter only the Internet address “http://scripts.sil.org/OFL”. Some character set editing programs recognise this entry and only if it is present are changes to the character set possible.

D. The “Home” field takes you back to the previous view, where you can then save (export) the font.

With FontMaker Self, you can add an OFL to your own font and thus share it with everyone.

Tip: Create a text or PDF file with the name “Read me” or “End User License Agreement EULA” for the font and refer to the Open Font License (OFL) there as well. You can download the complete OFL text from the website http://scripts.sil.org/OFL and add it to your font.

Thanks for the tip. However, do you have any suggestions for a free fonts license, which doesn’t allow modification of the font file? I want to give out my fonts for free but I don’t want to allow other users to tweak them a bit, call them theirs and offer them for sale, for example.

Thanks in advance for your help!!!

If you use the terms of OFL, you can’t prohibit modifications. See https://scripts.sil.org/cms/scripts/page.php?site_id=nrsi&id=ofl-faq_web

But you can create your very own EULA (End User License Agreement) and write your terms, based on the text of OFL.