TimeSaver Marker is an explanatory character set with 10 fixed background colours and with 500 Sans Serif letters for all European languages and 480 keyboard symbols, which has different, freely combinable text beginnings and endings in form, each of which can be quickly typed as ligatures. Total 1140 characters.

Problems solved in version 1.4 and new in 1.5
The space is (now again) unfilled. This means that all variants in Illustrator, InDesign, Photoshop and under Windows will now work. To write a filled space (with the background colour) use the »« (underscore) character or <°><°> (2x degree sign) character. Two underscores (» «) create a normal underscore »«.

How does TimeSaver Marker work? If you have activated the »Ligatures« function in a writing programme for the character set and type in a character string ((see:) Spelling) of one of the symbols, such as #(Text)=. Then the associated symbols appear automatically. If the character set is not available in the web or e-book, the plain name of the ligature appears (again), namely #(Text)=, which is still understandable for the reader. 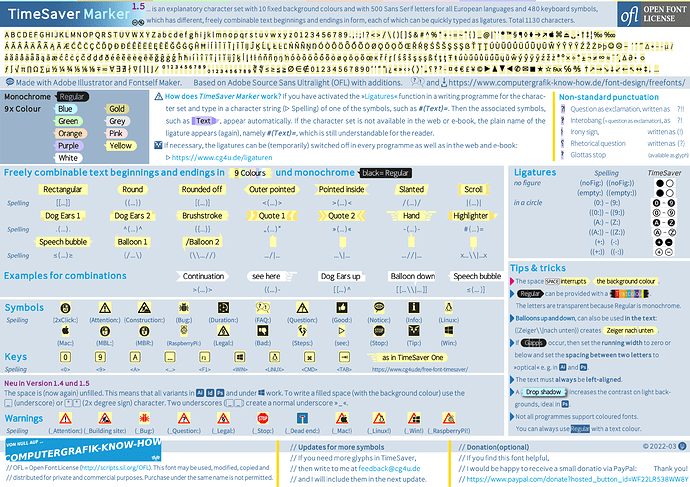